JP Post Media Mail may be cheaper depending on weight & Prefecture.

The Death of Chaos by L. E. Modesitt Jr. 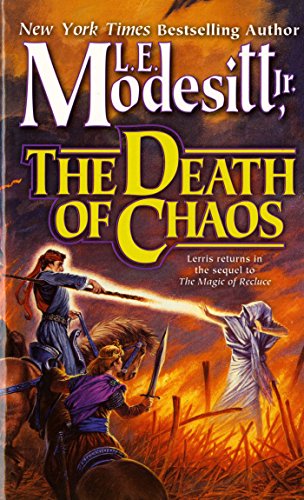 The Death of Chaos by L. E. Modesitt Jr.

THE DEATH OF CHAOS BY L. E. MODESITT JR. is in stock at our shop in Chitose, Hokkadio.

L.E. Modesitt, Jr.'s The Death of Chaos continues his bestselling fantasy series the Saga of Recluce, which is one of the most popular in contemporary epic fantasy.

Lerris has settled down as a carpenter in Kyphros, where his wife, Krystal, is the sub-commander of the autarch's military forces. His fellow apprentice from Recluce, Tamra, now travels with the Gray Wizard Justen. Justen is over two hundred years old and is the wizard who destroyed the White Empire and the city of Fairhaven (as chronicled in The Order War), though at great cost. But the whole world is in turmoil, not only from friction between the island of Recluce and the continent of Candar, but now the distant Empire of Hamor has sent invading forces across the ocean, as they have twice in the historic past - and this time they mean to conquer the world. Gradually, but ever more deeply, Lerris is drawn back into action and forced to exercise and strengthen his magical powers to become the greatest wizard of all time - or see his whole world destroyed. The Death of Chaos is the culmination of the saga of Recluce thus far.

“An intriguing fantasy in a fascinating world.”—Robert Jordan, New York Times bestselling author of The Wheel of Time® series

PRICE : not posted yet. Please email us for a quick answer & info: nandalowjapan@gmail.com

(We list hundreds of items at first and later add price & info.)